Ryan James, President/Public Adjuster
Filing a claim is like a game of chess. Experience and expertise are critical here, and hiring a professional is a viable option. The expert - public/private adjuster - also has their duties: prompt and clear communication, provide the precise amount - not more, not less, and understand the opponent’s (insurance providers) moves. One adjuster who is well versed in claim settlements is Liberty Adjusters, who has played the game well since its inception.

Liberty Adjusters provides public adjuster services to property insurance claims in the Tampa Bay, Orlando and Naples areas. “We represent homeowners and advocate on their behalf to make sure that the insurance companies are doing what they’re supposed to,” says Ryan James, President/Public Adjuster at Liberty Adjusters. “Communication is important where we keep our clients informed and educated along the process and allow the insured to make the final decision.” Liberty Adjusters provides accurate claims and sets the right expectation instead of frivolous claims.

In addition, the company follows a strict process and follows up on the claim as per the stipulated time frame required by the insurance carriers to get the claim resolved within time. A basic knowledge of the rules and laws that insurance providers have to follow ensures that there are no unnecessary delays in releasing the claim amount. Also, the focus is on getting the insurance provider accountable to furnish an accurate claim and not just the bare minimum.

Often, the company’s clients come up with the challenge that their claim has been underpaid. This usually happens because the claim amount is lower than the cost of repairs, leading to an underpayment. A case in point was a homeowner who suffered water damage to their kitchen. As per the policy, they had certain permissible, lower water limits. The client had been communicating with the insurance company for over six weeks, and the insurance company wasn’t willing to give them much more money than they already had, which was $4,000. When Liberty Adjusters was called in for help, the company followed up with the insurance company, put together their estimates, documented the damage, and sent the estimate to the adjuster with the insurance company. Both the parties got on a call, and Liberty Adjusters explained that their assessment was within policy limits. The insurance carrier agreed, and the entire claim was resolved at policy limits over a 10-minute phone call.

The fact that Liberty Adjusters is a name well-known as someone carriers can work with makes the claim process faster. And the company employees keep updating their game as per the updated process and procedures of the insurance carriers. To play the game of chess, which has millions of possibilities, one has to keep learning strategies and tactics and gain experience to become familiar with varied scenarios. And Liberty Adjusters is doing just that - play the game daily and get better at it.

Description
A public and private adjuster for property insurance claims in the Tampa Bay and Orlando areas. 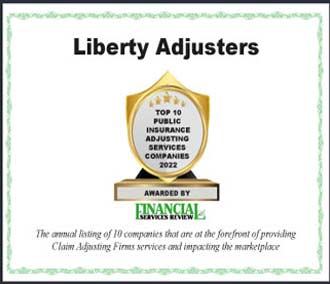 Copyright © 2023 Financial Services Review All rights reserved |  Subscribe |  About Us